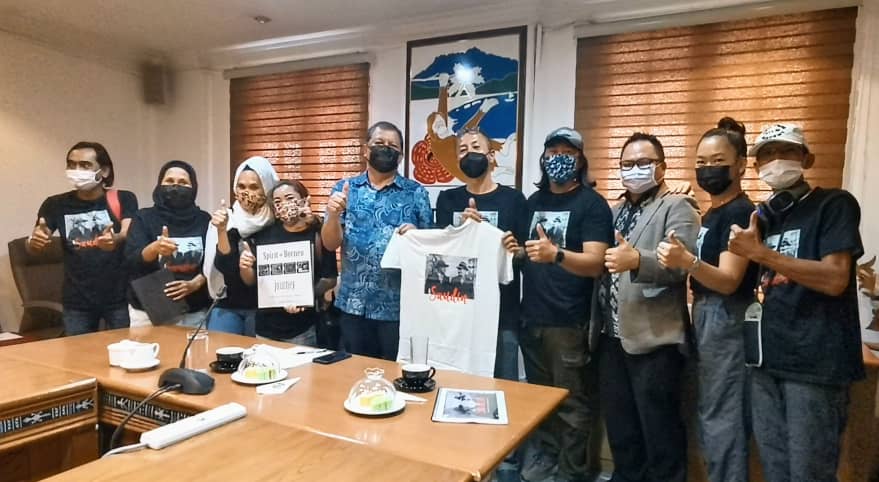 Datuk Joniston seen in the photo with Rye Prosuction team.

KOTA KINABALU, 29 November 2021:  A documentary about a native Murut Saudin bin Labotao is expected to become a tourism draw factor for Sabah and Keningau district.

Saudin from Kampung Ambual in Keningau was hired by the world’s first wildlife filmmakers Martin and Osa Johnson, to handle captured Bornean wildlife and accompany the animals to New York to attend to their adjustment there.

This happened in 1936, just before World War II, and Saudin’s experience travelling to New York was chronicled in Agnes Keith’s book Land Below The Wind.

His comical narrative piqued the interest of Rye Production Sdn Bhd producer Noreini Rahman, who was able to connect with Saudin’s grandchildren to create a thorough documentary about him.

The production team had today met with Sabah Tourism Board chairman Datuk Joniston Bangkuai to discuss possible collaboration to promote the documentary titled Saudin and to turn his house in Keningau into a museum gallery for heritage tourism.

Joniston, who is also Assistant Minister of State Tourism, Culture, and Environment, saw the necessity for Saudin’s story to be told because he played an important role in bridging the gap between different cultures.

“Something has to be done. The Sabah Tourism Board is always looking for new tourism products, and that Saudin story has many potentials.

“We need to promote who Saudin is, and I believe the documentary will generate interest. Of course, we will play our part in promoting Sabah,” he said.

Joniston also stated that a team would be sent to Saudin’s abandoned house in Kampung Ambual to assess the possibility of turning it into a tourist attraction.

Saudin’s house, according to his grandchildren, is in its original condition but has been slightly damaged by termites. His belongings have also been left in place, as has his graveyard, which is located next to the house.

Meanwhile, Noreini stated she spent four years researching Saudin and that the production team pitched the story to the National Film Development Corporation (Finas) and the History Channel.

She said the documentary was nearly finished and that it would be submitted to Finas as well as the History Channel for final approval early next year.

“With the assistance of the Sabah Tourism Board, we hope to launch the documentary in Sabah. This is a crucial documentary focusing on a native Sabahan, and we want the younger generation to know him as he is part of history.

“We also engaged the Kansas History of Museum, and they are excited to collaborate with us,” she added.

Norman, his grandson, will play Saudin’s character in the documentary. The friendship between Saudin and the animals he cared for, as well as the western people he met, is highlighted in the story.